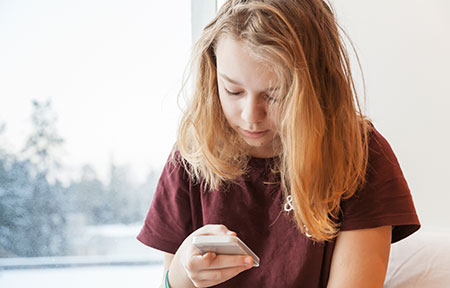 We all know that our teens love to text, but did you know that there are secret message apps that allow teens to keep their conversations away from the prying eyes of their parents? Keeping up with your teen is hard enough without them actively trying to hide things from you so you’ll want to keep an eye on these four private messaging apps.

If you see these apps on your child’s devices, you don’t automatically need to assume that they are doing something inappropriate or hiding things from you. You know your children best and will be able to decide if they are ready to use an app of this nature appropriately.

If you are looking to set better technology boundaries with your kids, check out these 4 Reasons You Need a Family Contract.

What is a Secret Message App?

Many of the private messaging apps available in app stores today include features that allow users to have hidden or secret conversations. While this can act as an extra layer of security, knowing that not anyone who picks up your phone can read these texts, it can also be used as a tool to hide who you’re are in contact with or the nature of conversations. A growing number of these apps even include self-destructing features that automatically delete texts, photos, or videos sent after a certain amount of time.

For some teens, these features can mean trouble. They can’t be held accountable for these conversations if they don’t exist, right? While the answer to this is obviously no, you may want to remind your teens that even though some chats might automatically delete, it doesn’t stop recipients from taking a screenshot and sharing with others. Every family is different, but parents may want to consider the amount of trust between themselves and their teen as well as their teen’s maturity level before giving them the go-ahead to use these apps.

Here are four apps to hide text messages that you should know about:

Other Private Messaging Apps and Features

Encrypted Messaging
Many private messaging apps today offer users the added security of encrypted messaging. Encrypted messaging encodes the message and information you are sending to another user making it unreadable until it reaches the recipient’s device. This doesn’t mean that in every case of encrypted messaging you won’t be able to see texts on your child’s phone. Some apps like WhatsApp will provide encryption that is also secured behind a lock or password, but others will just make sure your messages aren’t being intercepted on the way to the recipient.

Vault Apps
Vault apps differ from private messaging apps since they typically do not have any messaging capabilities. They do, however, allow users to store and hide chats, photos, videos, and files behind a password. Vault apps tend to look like other utility apps on your phone, like a calculator app, with the intention of masking its presence. Any incorrect password attempts are recorded and some even take a photo when a user inputs an incorrect password. These apps offer a sense of security for users looking to keep important information private, such as passwords, travel plans, or personal info but for teens it could mean they are looking to hide something from their parents.

Secret messaging apps aren’t always a reason for parents to worry, but rather something they should keep an eye on. These apps often have a lot of great features and secret or disappearing chats just happen to one of the many they offer. Parents should take into consideration these features and the amount of privacy these apps can offer your kids and determine what’s best for your family.

Being well-informed and clear about your expectations when it comes to device, Internet, and app use are the first steps in making sure your kids are using them responsibility. Additionally, using a parental control software can act as a second set of eyes and can help your family to manage app usage, screen time and more across all devices. Raising children in a digital world can be a daunting task but having the right tools and knowing what to be on the lookout for can make your job easier.

Katherine Cromleigh is currently a Social Media and Editorial Contractor and is studying communications at Purdue University. She hopes to add to the conversation surrounding technology and today’s youth.

View all posts by dillonpubliclibrary